Velcro is known and used across the world by major clothing manufacturers. The fastener effortlessly holds together when the two separate sides touch. One side features a scratchy hard surface, whilst the other side is soft and fuzzy. These two surfaces cling together, but how does this technology actually work?

How does Hook-and-loop technology work?

Hook and loop technology is as the name suggests. It uses two sides to attach together. One side has miniature hooks whilst the other features loops. When both sides are pressed against each other, the hooks are locked around the loops. The attached sides are then secured, which makes them useful for fastening clothing. Velcro adopted this technology and commonly make their products using nylon and polyester.

The invention of Velcro technology

George de Mestral was the first person to invent hook and loop technology back in the 1940s. De Mestral was a Swiss electrical engineer who stumbled across hook and loop technology by taking inspiration from nature. He noticed that Burdock burrs (Seeds) were getting caught on his clothes and also in the fur of animals. He was curious as to how these seeds clung on to fur or fabric. He discovered that the seeds had hundreds of tiny hooks when he examined the seeds under a microscope. This gave him an idea to replicate this natural process. Initially, people refused his idea, which motivated him to travel to Lyon. It was here that he was taken seriously. Lyon was the centre of weaving at the time and therefore the ideal location to grow and test his idea. He was able to get a working model by trial and error. He discovered that nylon was the best synthetic material to use as it is resilient and has the ability to hold its shape. Mechanizing the process to weave the hooks took 8 years plus an extra year to create the loom that trimmed the loops after they were weaved. In total, it took 10 years to form a mechanized process that worked. 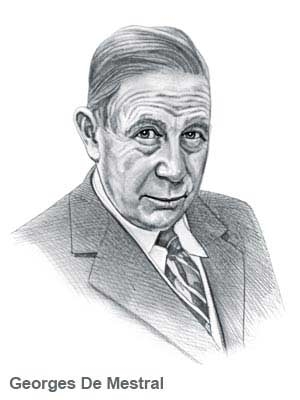 George de Mestral came up with the name Velcro by merging the French words Velours, which is French for velvet with Crochet, which translates to Hook. The appearance of early velcro was unappealing and therefore did not tempt clothiers. Over time, the appearance of velcro was improved and its use in the clothing industry rocketed.

Hook and loop technology has grown in popularity and now can be found in every corner of the world.